The iCarsoft POR II Porsche OBD-II scanner is an OBD-II system designed for Porsches. In addition to informing you of your car’s potential problems, the tool could eliminate some annoying functions.

But first, let’s take a look at the chart below to see how it competes against some other iCarsoft scanners for Porsche.

The OBD-II system is one that was adopted quite early on in the automotive industry. This system monitors the electronics of the car. The system is designed to help the vehicle perform a self-diagnosis check and report the findings.

OBD-II systems tell the driver where there is a problem. After doing so, it becomes the obligation of the driver to fix the problem. In general, the OBD II systems save the driver the cost of checking it in the garage.

The iCarsoft POR II Porsche OBD-II scanner is an OBD-II system designed for Porsches. In addition to informing you of your car’s potential problems, the tool could eliminate some annoying functions.

Most people would love to get rid of some warning lights and beeps. In such instances, the iCarsoft POR II Porsche Scanner comes in handy. 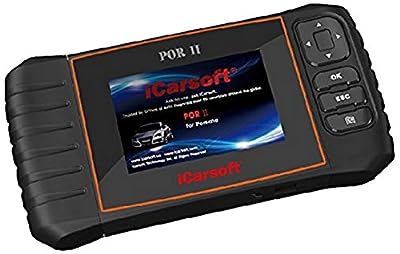 The iCarsoft POR II is a hand-held reader which can do it all-reads and clears trouble codes on all the systems such as engine, transmission, abs and airbag etc.
Check Price at Amazon

These models range from sporty SUVs such as the Cayenne and the Macan to sports cars like the 911. The diagnosis tool works on all of the models.

This scanner is only available in the vehicle. The tool does not come with an application for your mobile phone.

Most users report that they are happy with the display of the iCarsoft POR II Porsche scanner. The device has a display that contains all the functions the user requires. In addition to this, the functions are displayed on a colorful OLED screen.

The screen is also bright enough to see even at the brighter parts of the day. One flaw of the display is that it is relatively small. The screen is 4” large, making it slightly harder to code for people with larger fingers.

iCarsoft POR II Porsche comes as standard with the software developed by iCarsoft Technology Inc. The software is specifically designed to be user-friendly and unique at the same time.

As standard, guidance on how to use the software is in the manual.

Most users have reported that it is pretty easy to maneuver through the software’s functions without the manual.

Most users have reported that it is pretty easy to maneuver through the software’s functions even without the manual.

The iCarsoft POR II Porsche was made as a diagnostic scanner for Porsches. It analyses potential problems and flicks warning lights to alert the owner.

However, the system performs more functions than these, some of which include:

The iCarsoft POR II Porsche is made to perform the following key roles.

Who Is It Built For?

The system is designed explicitly for Porsche owners. It works well with almost all Porsche vehicles. Additionally, the car has to be OBD-II enabled.

The iCarsoft POR II Porsche OBD-II scanner is the ideal scanner for Porsche’s.