Why are we comparing the Launch CRP123i vs. Launch CRP129i vs. Innova 3160g? Because they are all mid-range OBD2 scanners (as far as price and functions), which are ALMOST similar. You can, therefore, substitute one for the others.

But it’s not that simple. Each of these OBD2 scan tools has a few unique features, which may make it more suitable for your needs. Thus, before you make the big leap, make sure you know what you’re paying for exactly.

Our feature scanners are priced between $252 and $176, with the CRP129i claiming the highest price tag. The CRP123i is the least expensive of the three, while Innova’s 3160g sits comfortably in the middle.

From those prices, you can already tell that these are OBDII scan tools meant for enthusiasts, car owners, and shade tree mechanics. That’s why we considered the essential functions for those audiences when making this comparison.

Don’t get it wrong, and you can still use either scanner even if you’re a professional mechanic. However, you won’t get high-end stuff like ECU coding and programming.

Nonetheless, these are the things we looked at when comparing the Launch CRP123i vs. Launch CRP129i vs. Innova 3160g:

Now, with that in mind, let’s get down to the best part: the actual comparison.

The Launch CRP123i, Launch CRP129i, and Innova 3160g have a few similar features, as you would expect. For starters, they do not support advanced diagnostics like ECU coding and programming. Therefore, if you’re looking for an OBDII scanner that offers that kind of functionality, you won’t find it here. Below are some more commonalities:

Like its counterparts, the CRP129i and Innova 3160g, the Launch CRP123i is designed for OBD2-compliant vehicles. That goes for domestic (American) and foreign (European and Asian) automobiles.

In case you didn’t know, OBD2 vehicles are those manufactured from 1996 to date. Therefore, if your car, SUV, or light truck is a 1996 or newer model, you may use any of these three OBD2 diagnostic tools.

Innova’s tool (3160g) goes as far as covering hybrid cars. The same can’t be said for the two Launch scanners, though. It’s not that huge of a difference anyway, of course, unless your car is a hybrid. Then, in that case, you’ll want to go with the Innova 3160g over the other two.

They’re all capable of diagnosing the CEL, otherwise known as the malfunction indicator lamp (MIL). If that light comes on, you can pick any one of these three scanners, and it will tell you what’s causing the issue.

At their most basic, the Launch CRP123i, Launch CRP129i, and Innova 3160g are code readers. They are capable of pulling and clearing codes in all compatible OBD2 vehicles. Additionally, you can use them to view live data from sensors. All three of them can graph PIDs from that live data.

All Launch Tech tools, including the CRP123i and CRP129i, come with a one-click update feature for upgrading software. The Innova 3160g doesn’t have that one-click capability. Instead, you have to navigate to the software upgrade option on the menu. Nonetheless, all these three scanners guarantee free software updates for a lifetime.

That’s a huge deal because it means that you can always update the scanner to cover new car models that are released each year. So, if you’re a car owner, mechanic, or enthusiast, you can still use either of them to diagnose and fix future vehicles.

Just as important is the fact that they are all equipped with Wi-Fi for easy updating. As long as you’re within internet range, you can update the software on these scanners.

Despite those mentioned above, the Launch CRP123i, Launch CRP129i, and Innova 3160g are more different than they are similar. Here’s how:

Our two Launch scanners are pretty similar in design and construction. They both run on Android 7.0, come with a 6100mAH battery, and feature a 5-inch touch screen. You can either use the touchscreen or opt to use buttons – it’s your choice.

The Innova 3160g, on the other hand, doesn’t give you such choices. Its 3.5-inch LCD screen is not touch-sensitive, which means that you have to use buttons at all times. Although Innova hasn’t specified the scanner’s operating system, it’s not Android. And unfortunately, it’s not the most intuitive user interface.

But once you find your way around its menus, the Innova 3160g is just as fast as any Launch OBD2 diagnostic scan tool. And it uses external batteries as well, just like the Launch CRP123i and Launch CRP129i. The only difference is that the 3160g takes 3 AA batteries (included in the kit).

Portability is always a big deal when you’re choosing a scanner. That’s especially true if you want something that can easily fit in the car’s front storage compartments. Or perhaps a scan tool that you can throw in a toolbox or backpack and not feel any bulkiness.

The 3160g is the most lightweight. But the tradeoff for that easy portability is that you’ll have to make do with a smaller, 3.5-inch screen. In case you suffer from compromised vision, you might want to choose between the two Launch scanners because of their relatively larger displays.

Would it be accurate to say that the two Launch scanners offer more? Absolutely! They diagnose the four central systems, while Innova’s scanner can only diagnose 3. However, just like the CRP123i, the 3160g can display freeze frame data, something that the CRP129i doesn’t do. Therefore, the Innova 3160g is not entirely an inferior OBDII diagnostic scanner.

It supports up to 5 reset functions. You can use it for oil reset, EPB reset, SAS reset, throttle adaptation and TPMS reset.
Check Price at Amazon 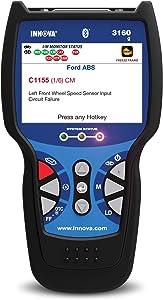 It has a slight edge because while it doesn’t pack as many reset functions as the CRP129i, it does support oil reset.
Check Price at Amazon

All three scanners can do battery maintenance. However, only the CRP123i and 3160g are equipped to check a vehicle’s I/M readiness status. The latter (3160g) makes a robust case for itself by also testing the charging system. It can do battery maintenance as well as checking a vehicle’s I/M readiness status.
Check Price at Amazon

Therefore, if you would rather have an OBD scanner that can double up as a battery and starter tester, then Innova’s offering makes a lot of sense. If, however, you would rather have a scanner than can do a handful of reset functions, then the CRP129i is your best pick. In case none of those functions is essential, then there’s no reason you shouldn’t consider the CRP123i.

The CRP123i blows the other two scan tools out of the water because it can do active tests for the EVAP system(mode 8) and O2 sensor. It also supports onboard monitoring (mode 6), something that neither the CRP129i nor the 3160g can do.

Launch Tech offers a 5-year warranty for both the Launch CRP123i and Launch CRP129i. Innova, on the contrary, offers just one year. A 1-year warranty doesn’t sound good, but it’s not a deal-breaker either because Innova makes excellent scanners.

And when you buy the Innova 3160g, you can save the trouble codes and live data pulled from the previous three vehicles. While that’s a handy feature, it’s not nearly as impressive as what the two Launch scan tools offer. They can record and playback data streams. This can be important if you want to review that data later on. Besides, these two devices allow you to send all diagnostic data of a vehicle to your email. From there, you can even make a printout to give to a customer in case they need it or for your filing.

First things first, each of these three scan tools comes with an OBD2 cable for connecting the scanner to your car. In addition to that, the Innova 3160g can also connect via Bluetooth. Its package includes a VCI connector that you plug into the car’s OBD2 port.

The connector then acts as an interface between the car’s ECU and the scanner, making it possible for you to perform diagnostics wirelessly. This is always nice if you want mobility as you work because a cable does not restrict your movement.

Unfortunately, neither the Launch CRP123i nor the CRP129i supports Bluetooth connection to the ECU. Therefore, your movement is pretty much limited to the driver compartment.

However, they both support Wi-Fi connectivity, which you can use to go online and update the scanner’s software. Besides, Launch’s scanners feature a “FEEDBACK” app for submitting any diagnostic issues that you may have (to Launch Tech professionals). If, for example, you don’t understand a code or piece of data, you can use that app to ask for help. The professional mechanics will tell you what the data means and even suggest possible fixes for the issue. That’s the best part about Launch scanners.

Innova has a version of the same, and it’s known as “RepairSolutions.” It takes the guesswork out of any diagnostic or repair project that you have.

When it is all said, which of our three focus scanners is the best for you? That depends on what you’re looking for. If you want a scanner that supports wireless diagnostics, then the Innova 3160g is the obvious pick. It can connect to the ECU via Bluetooth and allow you to move around freely as you work.

On the other hand, if the functionality is more important, it makes more sense to look at the Launch CRP129i. It not only diagnoses the four central systems, but it also brings five reset functions to the table.

The Launch CRP123i is the ideal pick if you want to run a few necessary bidirectional tests. It can do that for the EVAP, O2 sensor, and onboard monitoring.

Overall, all these OBD-II scan tools are excellent for car owners and enthusiasts. They can diagnose the essential systems (engine, ABS, and SRS), pull codes, display live data, and do all the essentials of OBD. Yet they are not too complicated to intimidate someone who isn’t a mechanic.

Read more: LAUNCH CR529 Vs LAUNCH CR319 Vs Kungfuren: Which many newbies are hunting for?

Q: Can these tools read and erase codes in Mercedes Benz?

A: Yes, provided the Benz is a 1996 or newer model. Note that each scanner can read and erase codes in specific systems. Please check the sections above for more info.

Q: Will any of these scanners bleed ABS?

A: Unfortunately, none of them supports ABS bleeding.

Q: Can I use the scanners on diesel and gasoline vehicles?

A: Yes, these OBD2 scanners are designed for both diesel and gasoline vehicles that are OBD2-compliant. If the car is a hybrid, then only the Innova 3160g will work.

A: Both are great brands with excellent customer support. However, Launch Tech’s 5-year warranty is more appealing than Innova’s 1-year warranty.

Q: Which of the scanners can I use to program keys?

A: Unfortunately, none of these scan tools support key programming. They don’t do any coding or programming.

Q: Can these read and clear codes for foreign cars?

A: Yes, all three scanners are compatible with OBD2-compliant vehicles, domestic and foreign.