OBD2 scan tools are a link between the driver and the ECU of their cars. Not all drivers are expert mechanics who understand code language. That’s why the manufacturer invented INNOVA 3140g.

The INNOVA 3140g was designed to be a tool for both professional mechanics and regular DIYers. It is an incredible tool with many diagnostic features. 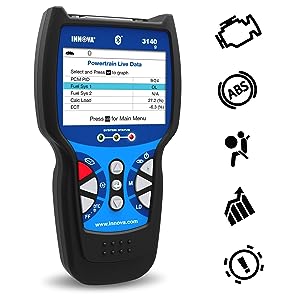 The following are the features of the INNOVA 3140g:

One of an OBD II scanning tool‘s significant functions is to assess an Engine Check warning light. The INNOVA 3140g is not an exception. It reads and interprets the Check Engine warning light of a wide variety of vehicles. These include both domestic as well as foreign vehicles. The device also scans light trucks, SUVs, and even hybrid cars. These are all vehicles manufactured after the year 1995. Additionally, the INNOVA 3140g has an OBD 1 diagnostics kit to diagnose older vehicle models. This kit only assesses popular vehicles manufactured from the year 1985 to 1996. Vehicles on this range are famous Ford, GM, Chrysler, Lexus, Honda, and Toyota models.

Availability of the OBD 1 system increases the range of cars the device can access. The check engine light trouble code is interpreted in an easy-to-understand language, helping the common DIYer understand the faults with the engine.

Bonus: What’s the difference between OBD1 and OBD2?

Live data means that the driver can assess the situation of the car as it runs. You connect the device and run the vehicle to evaluate its parameters as it runs.

The device reads two different parameters at a go helping you monitor how one affects the other. It is a rare but essential feature that the INNOVA 3140g has. You can quickly determine how one variable affects the other variable and form an opinion on what steps to take.

The data also fluctuates rapidly; therefore, reading could be a hassle. Even freezing the frame will require expert timing, which could frustrate you because the playback cannot slow down.

The INNOVA 3140g accurately reads and interprets the causes of ABS warning lights. It can do this on all vehicles manufactured after 1996 that are compatible with the device. The device also performs accurate scans of SRS systems for limited OBD II compatible vehicles.These include vehicles from Ford, GM, Toyota, Chrysler, and Honda models. INNOVA 3140g reads these codes and erases them after the issue has been dealt with.

INNOVA 3140g can quickly detect the malfunction in both the ABS and the SRS systems, putting the device above its competition. The device interprets the code in a language that is easy to understand. You can fix the error much faster with the help of the INNOVA 3140g.

SRS diagnostics are limited to very few vehicles. Some users report that it doesn’t work on several cars.

The INNOVA 3140g is compatible with all OBD II protocols, making the device compatible with most vehicles produced during and after the year 1996. The device works on ordinary cars, SUVs, light trucks, and even hybrids. INNOVA 3140g works on most vehicles with a battery capacity of 12V. The scan tool also contains OBD 1 compatibility that connects to popular vehicles from Chrysler, Ford, GM, Toyota, Lexus, and Honda. The limitation of OBD1 functions is very high. The buyer needs to be careful when purchasing this device for OBD 1 functions. Some customers complain that it does not work on their cars manufactured before 1996. One customer said that the device did not work on a 1994 Chevrolet Camaro Z, 28.

Who is it for?

The device was created for both expert mechanics and regular DIYers. It has expansive functions that are suitable for a mechanic. The INNOVA 3140g reads and interprets DTCs in plain language, making it ideal for the regular DIYer.